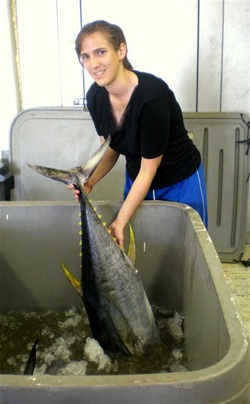 Biology: Yellowfin tuna are a highly migratory species that crisscross the Atlantic Ocean's tropical and subtropical regions. They spawn in the Gulf of Mexico, Caribbean Sea, and off the Southwest coast of Africa. Their bodies are built for speed and can weigh as much as 300 lbs. Yellowfin tend to school according to size, not just with members of their own species but also with skipjack and bigeye tuna, porpoises, dolphins, whales, and whale sharks. They are near the top of the food chain, preying on squid, fish, and invertebrates. Sharks are the only species to prey on yellowfin.

Sustainability status: Yellowfin tuna populations are near their target levels and the fishery is considered sustainable. More information is available here.

Harvest: Yellowfin tuna are caught using rod and reel, a selective gear that does not damage habitat.

Available filleted, from July to December.