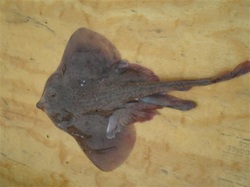 Biology: Raja, also called winter skate, are one of six skate species found in New England. Winter skate are found on George's Bank and in Southern New England, from the shoreline down to 600 feet. During the daytime, they lay motionless on sandy underwater slopes. At night, they prey on rock crabs, squid, worms, and razon clams. Winter skate reproduce through the black egg sacks commonly found in the wrack line and known as mermaid's purses. The pointed corners of these purses serve to attach the egg sacks to seaweed and rocks so that they do not float off. Each case contains one embryo, and each female skate produces about 40 cases per year.

Nutritional facts: A 100-gram portion of raja contains 20.6 grams of protein, 95 calories, and 9 grams of fat.