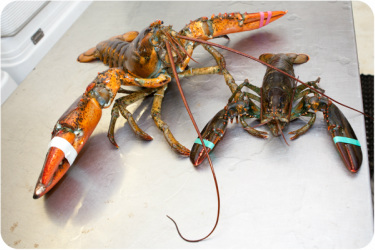 Found from Canada to New England, the American lobster dates to prehistoric times. Ironically, it was considered a poor man's fish, fit only for servants, until the mid-19th century. Now it is a famed delicacy!

Biology: Lobsters molt 2-3 times a year when young, and once a year when mature. When they have just molted, they are called "new shells". This is when their flavor is the sweetest. They cannot be transported in this state, but can be consumed locally. According to the Guiness Book of World Records, the largest lobster ever caught weighed 44 pounds. Lobsters have a pincher claw with quick reflexes, and a crusher claw, which is stronger. They are solitary and nocturnal, and like to burrow in rocky crevices. They eat just about anything: live prey, dead prey, seaweed, and even other lobsters.

Sustainability status: While lobster populations in the Gulf of Maine and Georges Bank are experiencing record highs, the stock in Southern New England is below target levels. Managers and lobstermen are working to devise new measures to rebuild the stock. More information is available here.

Harvest: We catch our lobsters in wire mesh traps. We bait the traps with menhaden, herring, and skate. We leave our traps in the water for about 4 days at a time.