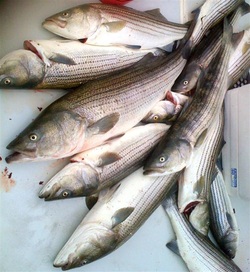 Biology: Striped bass is the official state fish of many of the Eastern seaboard states, including Rhode Island.They are found close to shore, particularly in estuaries. They migrate northward in spring and summer, and southward in fall and winter. They spawn in freshwater rivers. Stripers may live up to 40 years, and females reach larger sizes than males. Most stripers swim in schools, but large females tend to be solitary. Stripers eat primarily at night, dining on flounder, herring, menhaden, lobsters, crabs, clams, worms, and squid.

Sustainability status: Striped bass were once so plentiful that they were used for fertilizing farm fields, but by 1982, their numbers had plummeted to less than 5 million fish. Since then, they have made a miraculous comeback (increasing up to 65 million individuals) and are now supporting large recreational and commercial fisheries.

Available whole or filleted, during June.