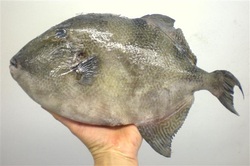 Biology: Triggerfish are found along both sides of the Atlantic ocean, from Nova Scotia to Argentina on the west and from England to the coast of Africa on the east. They prefer rocky outcroppings, coral reefs, and wrecks between 30 and 200 feet of depth. They color is drab in comparison to other, more brightly colored tropical triggerfish. Females, which grow larger and live longer than males, can reach 5 lbs and 22 inches. All triggerfish have two dorsal spines (not erect in the photograph), which give them their name: the first, larger spine remains erect until the second, smaller spine relaxes, thereby "triggering" the first one to relax.Triggerfish spawn offshore in the spring and summer. They deposit their eggs in guarded nests on the seafloor. Triggerfish use their powerful teeth to eat mussels, urchins, and barnacles.

Harvest: Triggerfish are hard to catch because they nibble at bait without getting hooked. When they are caught, it is as bycatch in lobster pots or by rod and reel fishermen attempting to catch other reef species. For this reason, we do not get large volumes of triggerfish at any one time.

Preparation: Triggerfish have firm, tasty, white flesh that is excellent for grilling.